We have been growing and developing our herd of cashmere-producing goats for a number of years now.  When we bought our first four goats, we had no idea how much we would end up enjoying them.  We now have close to forty with more babies on the way.

And there is nothing cuter than a baby goat.  I mean, just LOOK …. 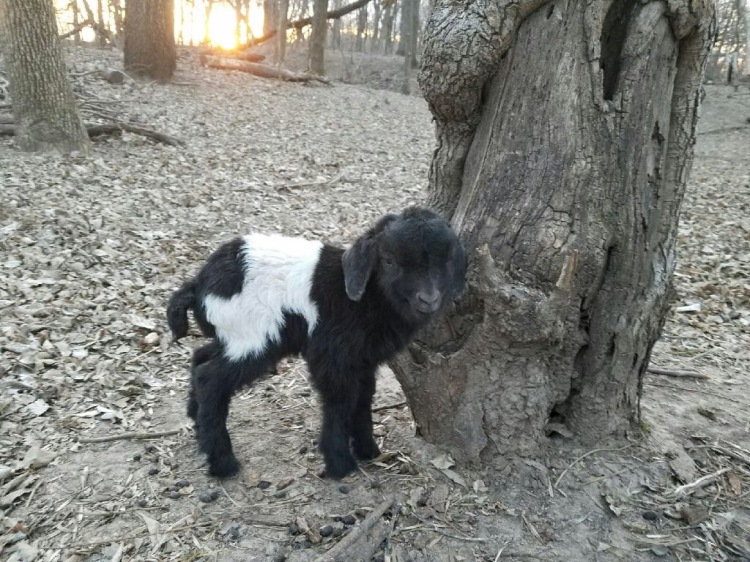 Goats, we have learned, can be very smart, are highly sociable creatures, and are prone to get into mischief.  We have been investing in lots of good goat fencing on our farm, as they are gifted escape artists.

So what is a cashmere goat?  Rather than being a particular breed of goat, cashmere can be produced by any goat.  That’s right – dairy goats, meat goats, all goats can produce cashmere.

Goats actually have two types of fiber – guard hairs, which are coarse outer-hairs, and the downy undercoat, which is the cashmere.

You can see in these pictures from last spring, the black goats are sleek, shiny and mostly black.  (You can also see their tendency towards orneriness).

This next picture is of our goats just recently.

These are the same black goats from the summertime, but you can see the fuzzy grey cashmere sticking out from under their guard hair.

Goats begin to lose their cashmere during mid-late winter.  Shearing would mean taking off all the guard hair along with the cashmere, which means our poor little goats would freeze for the rest of the season.  Which leaves combing.

Yes, that’s right.  You have to COMB the cashmere from each goat.  Which might be why we have yet to do it in all the years we have had goats.

But a few weeks ago, I noticed that one of the goats’ cashmere was beginning to come lose.  I had some time on my hands (usually unheard of!), so I thought I would give it a try.

One bag of cashmere fiber that weighed in at 0.6 ounces.  I have not done the math to figure out how much cashmere it takes to make a sweater, but I guarantee it is a lot more than a measly 1/2 ounce.  This is probably why cashmere is so expensive.  (Admittedly, I was probably pretty inefficient at harvesting the fiber and would get better with practice.  But still ….).

The one goat I have had my eyes on all winter is this one.  Shelly, the Cashmere Queen.  After my first try at harvesting cashmere, I coaxed her up onto the stanchion to work on her lovely fiber.  Only to find she was not ready for harvest.  *sigh*.  Maybe this weekend! 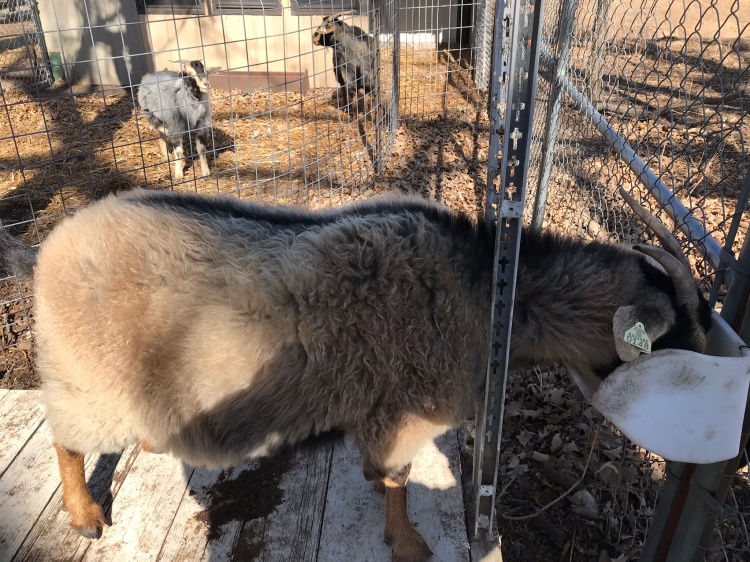 Regardless of the fact that we still have yet to truly harvest cashmere (and in reality, may never harvest cashmere), we still love the goats, and have the benefit of their brush-clearing skills.  (I will post “before and after” pictures of our wooded areas soon.)

We’ve made a lot of progress on our new high tunnel over the past month.

Almost all done except the plastic.  It takes a dead-calm day at a crew of people to get the plastic on. 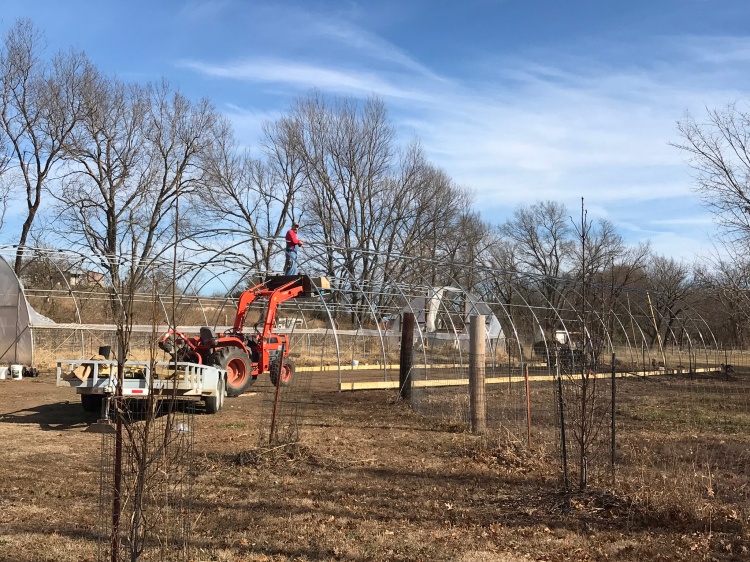 Now to open the seed catalogs to decide what delicious things to plant in it this spring.

Well, they aren’t beautiful, but these jalapeños are the last of our summer produce. Getting ready to sort through them in order to turn the good ones into delicious blackberry jalapeño jam.

I’m a little sad that the summer growing season is over, but also a tad relieved. Ready for a little R ‘n’ R this winter!

December 19, 2017 Update:  We have had TREMENDOUS support for our holiday gift packages this year!  We want to thank everyone who has helped make this Christmas sales season a huge success for our farm.  We are no longer accepting orders for Christmas 2017.  We look forward to serving our customers in the new year!

Last year, we had so much fun launching our first Christmas gift packages!  We have been working to make some tweaks to the products and process this year to make things even BETTER.  Our local flower shop, Timber Creek Floral and Gifts has been awesome at helping us prepare the packaging, and we are really proud of the way they look AND taste!

We have two basic packages we are offering this year, but we can customize a package for you if these aren’t exactlywhat you want.

Our Large Holiday Gift Package includes: one 2 pound local, raw honey, one pint local salsa, two local fruit jams/jellies, and one beeswax lip balm from our bees, all in a cute buffalo plaid crate.  Cost for the large basket is $36. 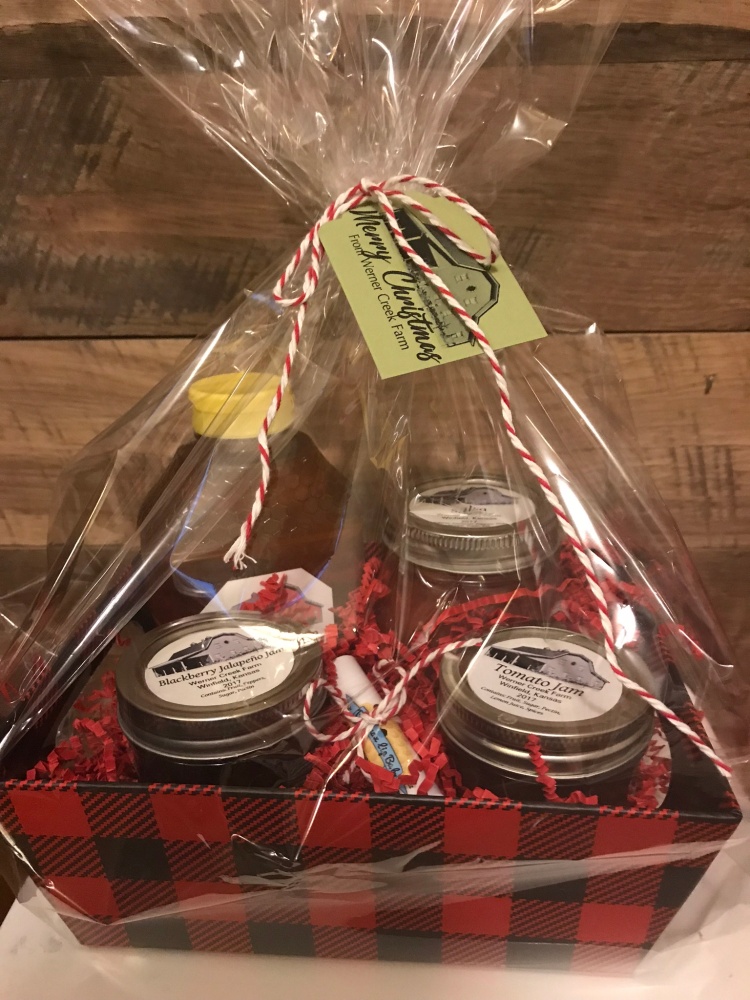 The small package includes: a 1 pound jar of local, raw honey, one pint local salsa, and one jar of local fruit jam/jelly for $18.  Increase the 1 pound honey to 2 pound to make the price $24. 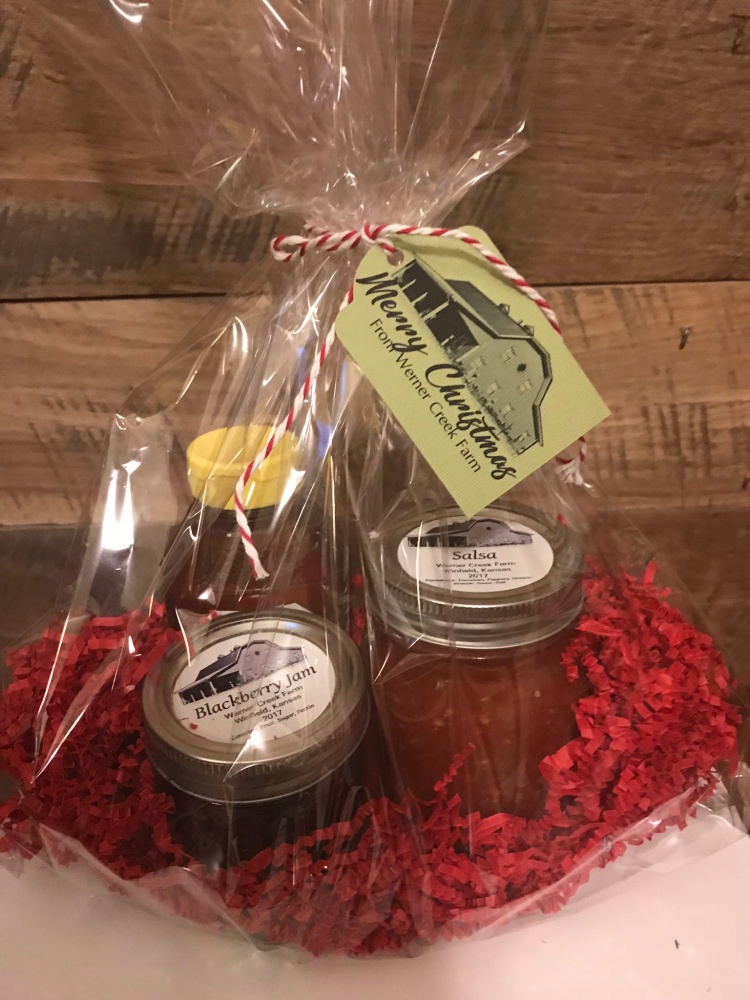 In each gift basket, you can specify the following:

Point of clarification – jelly is made from fruit juice, so is therefor smooth and with no pulp.  Jam is made from the whole fruit, so it will contain chunks of fruit and seeds. All of our jams and jellies are made with produce from our farm, or from our friends’ farms nearby.

We can also change the gift tags to say Happy Thanksgiving, Happy Holidays or whatever message you choose.

To streamline things this year, we have an online order form here –

Pint jars of salsa are $7

We also have 1/4 pint jars of beeswax hand balm available for $10.

The individual items aren’t on the order form, but just make a note in the instructions if you want to add on any of these items.